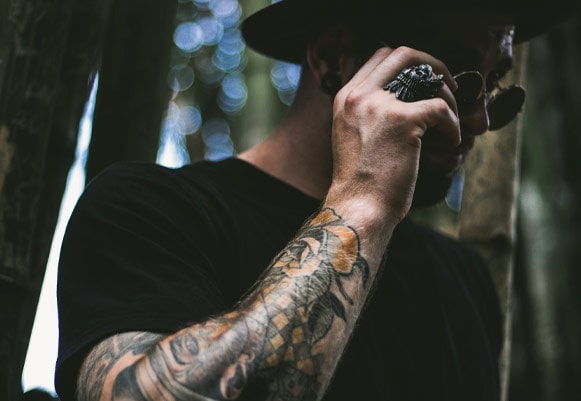 Tattoos are considered a sign of fashion by youth, a symbol of love by lovebirds and a depiction of remembrance of somebody special. Hence, tattoo business is at its best peak nowadays. But with time, relations may change or people may regret their tattoo design and it might lose its significance. That is when tattoo removal is most needed. Earlier tattoos were considered permanent, hence the only techniques available to lighten them were bleach, dermabrasion, some tattoo removal creams or surgical removal. Now, with the advancement in technology, tattoo removal is possible by lasers and tattoos can be modified.

We, at KALOSA, can help you fade away your memories by gradual dissolution of the tattoo through non invasive OPD based procedure. Let us improve our understanding on this subject.

Why is a tattoo difficult to remove?

Tattoos are relatively easy to put but a little difficult to remove. The reason for this is that while injecting ink is made to penetrate the top layer of skin. Hence, the actual ink is placed beneath the skin which makes removal difficult.

What is the latest available modality for tattoo removal?

Compared to conventional methods, tattoo removal is now being done with a much better technology using Q-switched lasers. Q-switched lasers are used to target different colors of tattoo ink depending on the specific light absorption spectra of the tattoo pigments.

What is the mechanism of this device for tattoo removal?

A laser treatment concentrates beam of light and delivers high energy at the targeted area. This energy penetrates the skin and gets absorbed by the colored pigment of the tattoo ink in the skin. There is gradual disintegration of these colored particles and the ink debris gets slowly absorbed by the body. thus time is taken to gradually fade away the tattoo completely.

Tattoos with blue and black pigments are easiest to remove whereas green and yellow are the most difficult colors to remove.

Is the procedure painful?

Usually, a numbing agent is applied to the skin before the procedure which helps to eliminate the pain associated it.

What to expect during the procedure?

How many sittings of laser are required for complete removal of the tattoo ?

The number of treatment sittings depend on multiple factors such as your skin color, your tattoo size, the colors of tattoo, the distance from heart etc.

A gap of 6 to 8 weeks is usually given in between 2 sessions of laser treatment to allow skin to heal completely. Tattoos further away from the heart, such as those on the lower legs or ankles, usually take longer to heal due to reduced circulation in the extremities.

Who are the best candidates for tattoo removal?

The best candidate is a fair-skinned person with a dark colored tattoo.

What are the post-treatment considerations?

Immediately post laser treatment, a slightly elevated, white discoloration appears thought to be the result of rapid, heat-formed steam or gas, causing dermal and epidermal vacuolization. This may or may not be accompanied by punctuate bleeding which represents vascular injury due to the laser's interaction with tattoo pigment. Minimal edema and erythema of adjacent normal skin usually appear which resolve within 24 hours. Subsequently, a crust appears over the entire tattoo, which sloughs off at approximately two weeks post-treatment. Some tattoo pigment may be found within this crust and gradually fades away after multiple sittings.

What are the post-procedure precautions to be followed?

Are new tattoos easier to remove?

Contrary to popular belief, new tattoos are more difficult to remove. Your body is still reacting to receiving a new tattoo, so it’s best to wait 8 weeks or more before having laser tattoo removal done.

What are the side effects of the procedure?

WHY KALOSA IS THE BEST TATTOO REMOVAL SURGERY CLINIC IN DELHI/ NCR ?